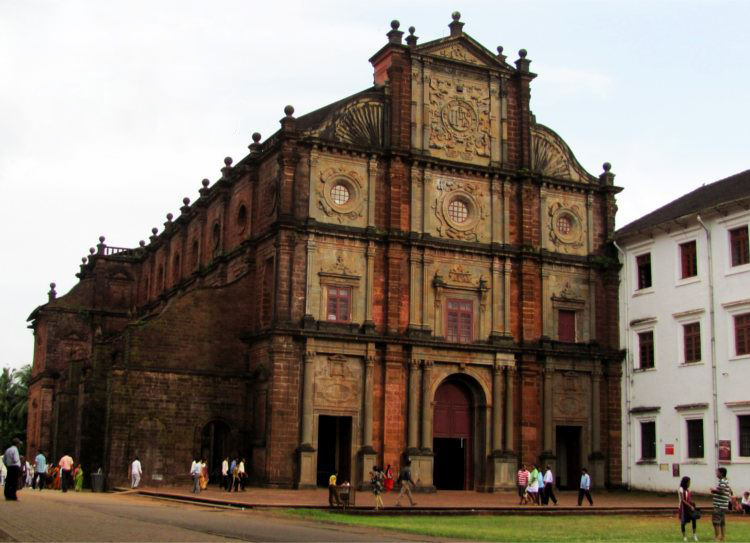 The Arabs were controlling the spice trade with India since the end of the 12th century AD. During the 15th century AD, Spain and Portugal, the then main maritime powers of Europe, initiated a series of expeditions with royal patronage. While one such voyage led to the discovery of West Indies by Columbus, another voyage brought the Portuguese to India, the El Dorado.

Vasco da Gama, a nobleman and navigator sailed out from Portugal on July 8, 1497, with 4 ships and 170 men, travelled along the western coast of Africa, crossed the Cape of Good Hope south of South Africa and moved eastwards to reach Kapukad, twelve kilometers north of Calicut on the Malabar coast of Kerala, on May 17, 1498. Indian spices and spread of Christianity were the two driving factors behind this voyage.

After sustained efforts of almost 80 years by the Europeans, this breakthrough heralded a new dawn in Indo-European relations. Portugal made expeditions to India a regular annual event.

The Portuguese eyed the Arab monopoly of Indian spice trade and tried to overthrow the Arabs. They succeeded, however, after continuous battles with the Arabs within twenty years of their arrival in India.

Pedro Alvares Cabral led the second voyage in 1500 AD when he brought 17 missionaries to convert the Hindus. He established the first Portuguese factory at Cochin and established friendship with the Chief of Cochin and Cannanor

In his second voyage in 1502, Gama was instructed to snap the Arab trade with India. He destroyed the Muslim business at Calicut. The 14th century saw a series of Muslim invasions on Goa, from the north. In 1312 Govepuri was almost completely destroyed, and after 15 years of fighting, the Muslims returned under Mohammed Tughluk and Chandrapur was beaten down to ruins.

The Muslim kingdom of Bahmani conquered Goa in 1347. The temples in Goa were the target of the fanatic zeal of the invaders who murdered priests and looted the temple wealth. Devotees moved their deities to safer areas under Hindu control.

Many Hindus fled southward. The persecution continued till 1378, when Goa was retaken by the neighbouring Hindu kingdom of Vijaynagar. Goa then started exporting spices to Arab nations, and got Arabian horses for the Vijayanagar army.

During this period, a lot of bloodshed followed when the Bahmanis persecuted the Hindus on a mass scale. Hindu temples were razed and Govepuri was brought down to its last brick. After the destruction of Govepuri, the Bahmanis organised a new capital at Ela, created on the northern banks of the river Mandovi to facilitate trade through the sea routes as the Zuari had begun to silt up.

Yussuf Adil Shah of Bijapur built many impressive buildings and a wonderful palace. The Portuguese later used this palace which is now the Secretariat in Panaji, and the old story of affluence started again, and Gove became an important trading destination again. Gove also became a port from where Muslim pilgrims left for Mecca. Goan history dates back to antiquity. Rock carvings and rock engravings founds at various places in Goa, indicate that Stone Age people had settled in this ancient land around 10000 – 8000 BC. These people were hunters and gatherers.

In modern recorded history, the first written mention of the land of Goa is on the cuneiform writings of the Sumerian era around 2200 BC. Goa is referred to as Gubio, by the King Gudea, the ruler of the kingdom of Lagash. In support of this theory, interestingly, the agricultural fields in Goa follow the Sumerian measure of 12 cubits to a pole or 0.495 of a metre to a cubit. This is different from the 0.46 unit found in most areas of India.

There is also some evidence to suggest that around 1775 BC, the Phoenicians, who were expert seafarers settled in the areas around Goa.
The Vedic Period

Goa is then referred to as Gomantak (in Sanskrit meaning the fertile land with plentiful water) around the period 1000 – 500 BC. This is considered to be the time when the epics of Mahabharat were written.
In this epic of Hindu mythology, the migration of Saraswat Brahmins from the north to the present day area of Goa is woven around the legend of Parashuram, the sixth incarnation of Lord Vishnu. Goa finds its first mention as Gomantak in the Harivamsha part of the epic Mahabharat.

In this southward migration, the Saraswat Brahmins who first went to Bengal, are supposed to have settled in the Konkan area around the year 1000 BC. The indigenous locals of the area, the Kunbi tribals, worked together with the Brahmin families to create a fertile stretch of land between the Arabian Sea and the Western Ghats.

The oldest archaeological evidence of Goa’s ancient history date back from this period. Excavations have unearthed copper plates, stone inscriptions, coins, manuscripts and temple inscriptions which throw some light on the history of this period. The Girnar rock-edict of the Mauryan King Ashok mentions the people of Goa as Peitinikas, Rashtrikas and Bhojas.

The history of the mighty Mauryan dynasty finds the next instance of a historical reference to Goa. At this time during the period between 321 to 184 BC, Goa was under an administrative region by the name Kuntala. However with the death of the legendary Ashoka the Great in 232 BC, the Maurya empire fell into a rapid decline and Goa soon changed hands.
The Marathas from the neighbouring areas took control of Goa from the Mauryas, only to be shortly ousted by the strong Anand Chuttus who ruled for a short while themselves. Then came the rule of the Satavahanas, who already controlled a large area on the western coast of India. For about 700 years after the Satavahana period, Goa was controlled by Hindu dynasties of the region. Among these were the Scytho-parthians (2nd – 4th century AD), the Abhiras, the Batpuras, and the Bhojas ( 4th – 6th century AD), the Chalukyas of Badami (6th – 8th century AD) and the Rashtrakutas of Malkhed (8th to 10th Century AD).

The Bhojas took over in the 2nd century and ruled from Chandrapur (present day Chandor) for almost 300 years. Then the mighty Chalukyas of Badami brought the region under their control, leaving some isolated regions where the Kadambas ruled supreme. The Shilaharas overcame the Chalukyas in the 8th century and ruled for another two centuries.

In 973 AD, the Chalukyas laid siege to the Shilaharas. Taking advantage of the situation, the King Shastadeva of the Kadambas conquered Goa. The Chalukyas also were content to let the Kadambas be in power, leading to one of the most stable periods in Goa’s history.

This first Golden Age of Goa under the rule of the the Kadambas lasted from 1006 AD – 1356 AD. A local dynasty which soon became fairly powerful in the area, the Kadambas were feudatories of the Hoysala kingdom.

They set up their capital at Chandrapur (modern day Chandor) and it remained so from 937 to 1310 AD at which time it was moved to Govepuri or Gopakapatana on the banks of the Zuari river, the site of today’s Goa Velha. The first settlement at Old Goa, then called Thorlem Goem, was constructed by the Kadambas in the 11th century.

Goa became an important trading centre during this period, with merchants from the Malabar coast, Bengal and as far away as Sumatra and Arabia vying for business. At one time an Arab merchant was even made governor of Gopakapatana.

Religious tolerance was a very important part of the Kadamba rule and even a mosque was built on the west coast under the patronage of the Kadambas. With a number of temples being built, Goa became an important place of pilgrimage for Hindus from around India. Hindu centres of education also sprang up in Goa.