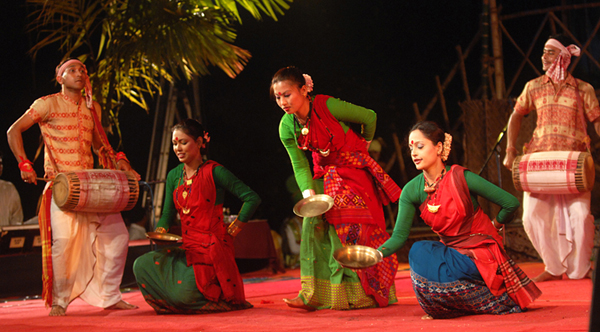 The Konkani tiatr, a dramatic art form, unique to Goa has flourished and thrived for over a hundred years. Tiatr has been sustained entirely by popular support as it has never been extended any patronage and help either by the Portuguese colonial regime or successive governments in post liberation Goa.

Tiatr shows are invariably housefull particularly when a new tiatr is launched. Tiatrist have achieved a high degree of professionalism in recent years with elaborate sets, lighting and other technical aspects. But the success of the tiatr is mainly due to the fact that the themes chosen are topical and contemporary.
What distinguishes the tiatr from other dramatic forms, is the songs on topical, burning, controversial issues that are interspersed through the performance. These musical interludes which are very satirical are independent of the main theme of the play. The songs are irreverent and gently or at times even savagely poke fun at the government.
There is a very healthy sense of irreverence in the themes and the dialogues in tiatr and the high and mighty including ministers and even priests. The tiatr as a dramatic form has been traditionally the exclusive preserve of the Christian community.
Even the harshest critics of tiatr acknowledge that it was this dramatic form which kept the Konkani language alive during Portuguese colonial rule, when Konkani was suppressed. Tiatrists played a major role in the struggle to make Konkani the officials language of the State. Folklores bind the present with the past and keep the continuity of civilization. The originality of folklores have pleasantly surprised even most erudite scholars and litterateurs.

Goa has been inhabited by many racial stocks. No other region in India perhaps has had such a wide variety of political regimes. The various rules introduced their life styles and cultural influences of which, the marks are vividly to be seen in the races and the rulers, there have been the in comers for trade and commerce and the men of the armed forces drawn from different cultural groups.

During the history spanning over 2,000 years of life, Goa has been shaped by the Bhojas, Shilaharas, Rashtrakutas, Kadambas, Vijaynagar rulers, Adilshahi and finally the Portuguese. The changing colours of history have left their multiple and lovely shades on the Goan life. And folk art has not been an exception to it.

The traditional folk music and dances have continued uninterruptedly, while the influence of the Portuguese music and dance on the local culture has helped evolve new forms. This happy blending and co-existence of cultural traditions gives a unique character the music and folk dances of Goa.. Goa’s cultural traditions literally stretch back to the dawn of civilization. Despite successive onslaughts and the ravages of alien occupation, Goa’s cultural traditions have displayed amazing resilience with stimulation by every fresh challenge.
To a large extent, Goa’s cultural heritage was enriched by a slow but unremitting process of absorption and assimilation of the more congenial features of alien culture. The focal point being the symbiosis of Latin and local cultural strains.
Music itself runs the entire gamut of sonic versatility; from the rustic Dhangar (Shepherd) playing and flutes to sophisticated tabla and sitar or violin and piano soloist thrilling large audiences in concert halls. Music is the time seller at all major social events-feasts, festivals, “zatras”, and marriages.
Freedom brought about a cultural renaissance in Goa along with providing a fresh impetus to the classic literature and fine arts and a revival of the folk arts.
Once again the almost forgotten folk dances Dhalo, Fugdi, Corridinho, Mando and performing folk arts (like Khell-Tiatro), Jagar-perani and many others have come out into their own. Indeed the folk music and folk dances have crossed the borders of the state and become popular in the rest of the country during the past 25 years.
A Goan is said to be born with music in his blood and music literally accompanies him from the cradle to the grave. Musical traditions run in whole generations.